In recent market history, there have been more than a few instances where a dim view of major indices and other risk-sensitive assets was on the verge of technical collapse only to find a speculative appetite that saved the day. As we approach the new trading day, we are again on the cusp with some obvious fundamental holds to grab before we take the leap. Taking this analogy even further, it seems that the surrounding financial and economic environment is well positioned to throw us into the abyss. One of the most immediate and novel catalysts to pressure another leg lower for benchmarks like the S&P 500 was the earnings update after the NYSE closed on Tuesday. Many large US companies reported on their performance in the last session, including Microsoft (MSFT) which beat expectations of $49.05 billion in revenue in the quarter with an actual print of $49.36 billion. of dollars. As the company with the third-largest market capitalization ($2.025 trillion), this can be a significant drag. However, Google’s own shortfall can more than make up for the goodwill. Revenue growth slowed with $68.01 billion coming in against a market estimate of $68.11 billion. A reported $75 billion share buyback might help matters, but GOOG was still down 2.6% later in after-hours trading. If we break the head-and-shoulders pattern seen below, it could very well tip the scales.

The next move risky assets make may redefine our trajectory. There is industry-leading technical support on the wide range of speculative benchmarks I monitor, including ‘rest of the world’ indices (the VEU ETF), emerging markets (EEM ETF) and junk bonds (HYG ETF). Even outliers like crypto (Bitcoin slipped 39,000) and yen-based carry trades are buckling under pressure. Still, if I had to select just one category to monitor its influence on traders’ intent, it would be US indices. The Dow Jones back below its ‘technical correction’ mark at 33,250, the S&P 500 closed at session lows and within reach for Feb 24and swing low and the Russell 2000 fell to a new 16-month low. However, it is the Nasdaq 100 which is at the crossroads of the various speculative currents. Where technology was an undisputed leader before and after the pandemic, it is now taking the biggest hit. Massive market cap gains this week are key elements of the NDX. Moreover, the index is back in “bearish” technical territory. Heading into the next US session, we sit just above the bottom of the 12-month range – which also happens to be 38.2%. Fibonacci retracement from the post-pandemic low (at around 13,000/12,950). 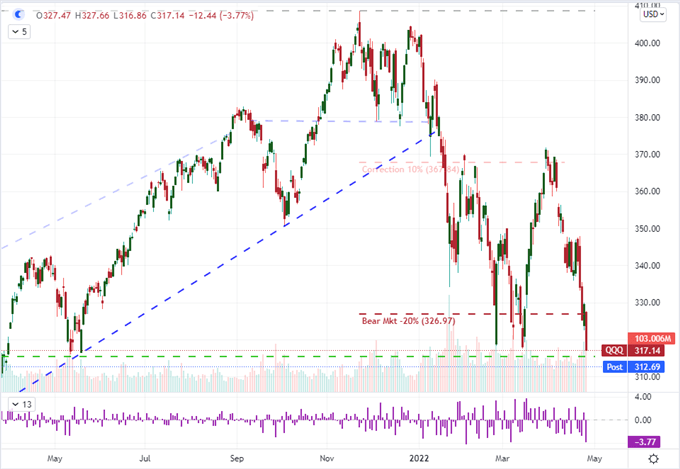 If you’re looking for a fundamental boost for a breakdown or recovery, I think we’ll see the biggest effect if after-hours earnings updates were to turn sentiment around. If this volatility driver proves insufficient, we could see the market drift as there are not many scheduled fundamental events that can be expected to become a systemic driver. On the record, we have monetary policy fodder in the Australian CPI and the ECB President’s speech – although the most influential are Thursday morning’s Bank of Japan update; and, far more powerfully, the FOMC rate decision next Wednesday. Russia is another substantive issue that could come back to the fore after reports that Gazprom was cutting off gas to Poland and Bulgaria – an economic pinch. Yet for Russia itself, data updates on business confidence, industrial production and retail sales will provide insight into the aggressor country. If we go through the next US session without a clear heading, Facebook’s earnings expected at 20:05 GMT may stir the pot again. 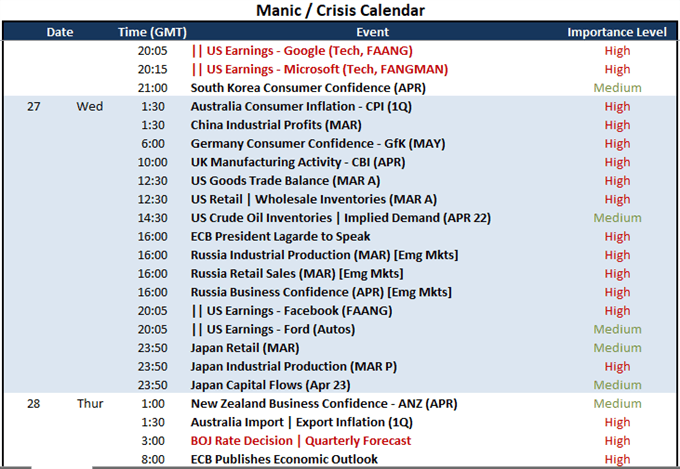 Speaking of convergence in fundamentals and sentiment, the dollar represents significant convergence. In the traditional interpretation of the economic race, the role was not particularly favorable. Consumer confidence fell slightly to 107.3 (from 107.6), home sales fell -8.6% and durable goods overall rose 0.8% less than expected. Nevertheless, the DXY index again reached new highs in two years. I’ve seen considerable space in the headlines linking momentum to interest rate expectations, but traditional measures of this course (US 2-year yields and Fed Funds futures) have actually slightly retreated. It would appear that the greenback’s more conventional role as a safe haven came amid the broader fall in financial markets. I think a big (bearish) trend reversal would be really fueled if the markets came to sincerely believe that the FOMC would keep its word not to support the markets (the so-called “central bank put”) if we we are entering a significant correction. For the US currency as a safe haven with an attractive carry, this would be a serious boost. 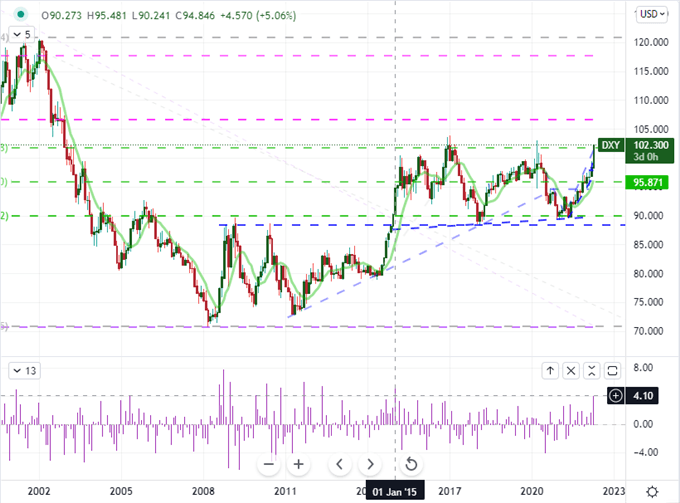 Watch the dollar – but focus on USDJPY

As we navigate through the middle of the week and significant risk market disruption, there will be a lot to learn from the move in the US currency. There has been a considerable rally in the benchmark currency over the past 11 months, in part due to rising interest rate expectations. Now, it looks like the same haven pull is mingling with those bullish intentions. As the DXY nears a breakout that would reverse two decades of price action, we see EURUSD pressure its own 2020 lows while GBPUSD indulges in its worst three-day sell-off in 2020. 25 months. Yet, the pair that really stands out for me is the USDJPY. Like most other yen crosses, it benefited from rising winds in interest rate expectations that pushed it to a 12.5% ​​rally in the space of just six weeks. Well, rate expectations may be sticky, but the sentiment is not so watertight; and the decline in the S&P 500 has led to the same – at least over the past week – for most yen pairs. Although the potential return forecast does not change much, the market’s appetite to seek exposure to such a low return in tumultuous conditions where liquidity is needed has made this a bullish view to pursue. And yet, the USDJPY has yet to seriously break the bullish spell. Technically speaking, it has pulled back enough to push the USDJPY below its 10-day moving average. This is the first time the exchange rate has slipped below back support (so far) in 36 trading days. This corresponded to an extraordinary run until December 2016, but there were no other comparable movements – much less longer – on the historical data that I have treated. Statistically, this is an extraordinary race subject to an equivalent correction; but practically, the fundamentals matter here. If risk aversion continues, the greenback could find a “safe haven of last resort” offer under higher flows; but the first step in sweeping away risk aversion is first to unwind the existing risk exposure. This would mean pulling out of USDJPY carry. This interesting fundamental mix is ​​why this pair is so important to watch going forward, whether you are an FX trader or not. 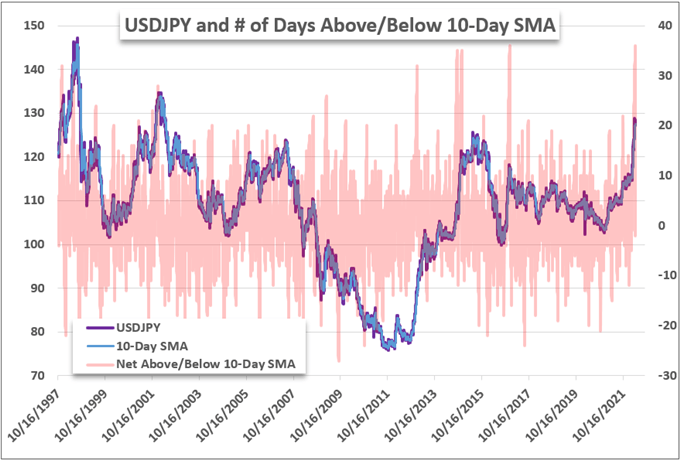 Chart created by John Kicklighter with data from IG

element. That’s probably not what you wanted to do! Upload your application’s JavaScript bundle to the item instead.