This article will examine the relationship between the US dollar and the Chinese renminbi. The negative trade balance with China has led China to hold large amounts of US debt even though the exchange rate between the two currencies has been relatively stable. China’s plan for the future of the Renminbi will be discussed with the aim of alerting US investors to possible Forex developments.

Stimulation for the rest of the world: peak in imports, the merchandise trade deficit worsens

Recent figures indicate that the US trade balance deficit has continued to worsen. This may be due to stimulus packages that put money in the hands of consumers without increasing the production of goods. 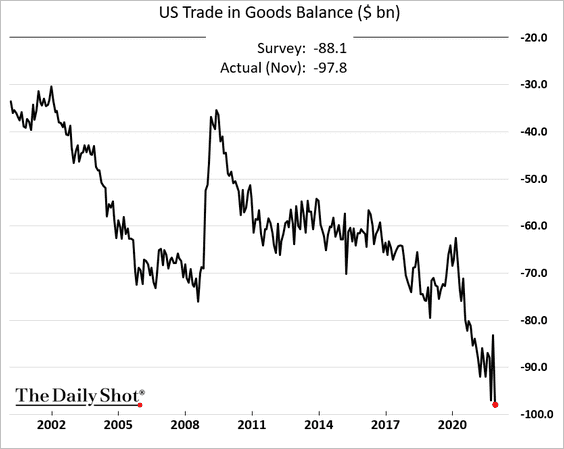 Even though the trade balance deficit is expected to be smaller in the near future, the fact remains that the United States imports more goods than it exports.

The trade balance deficit with China remains huge. The figures below do not include December 2021. 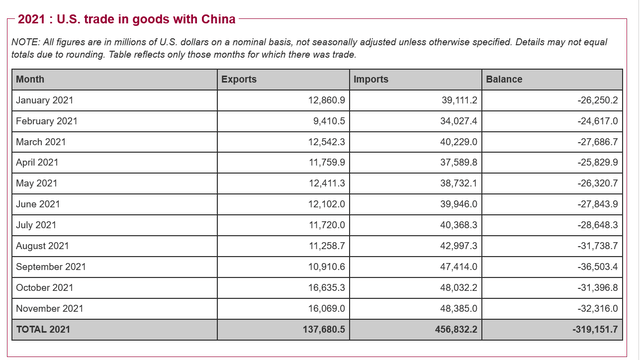 China holds a large chunk of US debt and is only overtaken by Japan.

The US Debt to China: How Much is it and Why?

The exchange rate between the US dollar and the Chinese renminbi has been fairly stable recently. The CNY strengthened somewhat against the USD, rising from around 6.4 to 6.3.

The chart below dates back to 2001, when the PBoC held the Chinese currency at around 8 per dollar. The renminbi then fell and appreciated against the USD. The PBoC then stepped in again in 2008 and held the exchange rate at 6.8 until 2010, when it again relaxed its hold on the exchange rate. This does not mean that the PBoC does nothing to influence the exchange rate, but it lets it fluctuate within narrow prescribed limits in order to give the impression that the currency is stable. 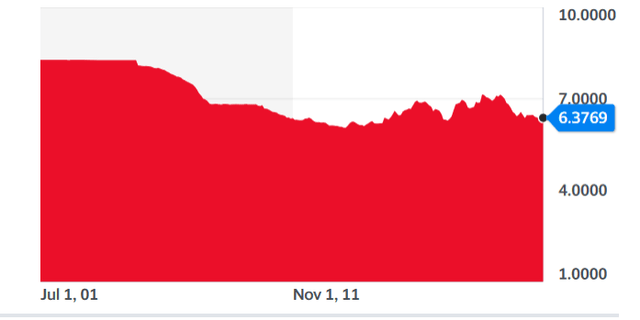 Investors will be aware that Chinese and Japanese businessmen see business as war. They will have studied “The Art of War” by Sun Tzu, which was probably written in the 6th century BC. This author is not familiar with the deliberations of the leaders of the PBoC or the discussions of the CCP on financial policy. It should be clear that what follows here is speculation based on what is commonly known about the Chinese currency.

Starting from the idea that the PBoC follows a strategy decided by the Chinese leaders, it is important to note that the digital yuan, a CBDC (Central Bank Digital Currency), was developed for the express purpose of advancing the strategic plan of China aiming to become the world’s leading country by 2050. Since stability is one of the main goals of the CPC, it would follow that the project of becoming the dominant world power would involve avoiding, in the possible, financial upheavals and military adventures. This should not be interpreted to mean that threats and bragging would not be used if considered useful by the CCP to achieve Chinese objectives.

One of the problems with the PBoC is the large amount of US dollars held as Treasury debt. If the dollar depreciated rapidly in the Forex markets, it would cause a loss for the Chinese. Another problem is dollar inflation. If the renminbi appreciates against the dollar, Chinese exports to the United States would cost Americans more in dollar terms, making it more difficult for Chinese companies to export to the United States. One solution to this problem is to keep the exchange rate lower in order to avoid problems for the export industries. This problem is also that of the SNB (Swiss National Bank). Preventing the Swiss franc from appreciating against the euro is something the SNB has struggled with for years.

It remains to be seen how the PBoC will counter the upward pressure on the Chinese currency due to its transformation into the more often used international currency. Avoiding internal renminbi inflation while cushioning increases in the value of the renminbi on the Forex exchanges is going to be difficult to do. Increasing the amount of currency in circulation will be necessary to meet the growing demand for foreign currency as the renminbi’s influence in the markets grows.

The result for investors

It is not yet time to announce the funeral of the US dollar. What seems most likely is that there is going to be a steady decline in the dollar’s influence. One of the reasons for this development is the United States’ use of currency to apply economic sanctions to a large number of countries that do not bow down to Washington. China, Cuba, Iran, North Korea, Russia, Syria and Venezuela are considered by some to be part of the axis of evil. These countries will certainly not object to the US dollar having difficulty maintaining its dominant position in global finances.

Investors still have time to diversify their portfolios in order to protect their wealth. Inflation makes it more difficult. The Fed mumbles on QT (Quantitative Tapering) and raises interest rates. Turbulence in the stock and bond markets is expected to follow.