Exports rose 24% last month from a year ago, according to data released Monday by the Ministry of Trade, Industry and Energy. This figure is the second highest since $ 55.8 billion recorded in September and the highest for October.

That brings the country’s exports from January to October to $ 523.2 billion, already surpassing last year’s annual figure of $ 512.5 billion. It was the first time the country’s cumulative exports in the first 10 months exceeded $ 500 billion since January-October 2018.

The government is confident that annual exports will reach an all-time high, breaking the 2018 record of $ 604.9 billion. 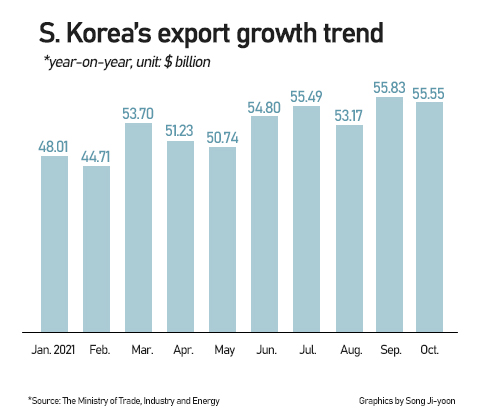 The trade balance posted a surplus of $ 1.69 billion, maintaining a profit for 18 consecutive months.

Exports to other regions also increased for the seventh consecutive month or more.