Mixed signals. This is what you and I have seen recently in the financial landscape. Equity market volatility has been key to volatility in the Treasury market, the foreign exchange market and the commodity market. The US dollar surged against the euro, British pound, Japanese yen and Canadian dollar on Tuesday.

This strength has been driven by the idea that the Federal Reserve seems intent on focusing on implementing policy aimed at slowing inflation…at the expense of economic activity. This has hit commodities in general as recession fears rise, and energy commodities in particular.

Next, we come to US Treasuries. Yields fell precipitously up and down across the curve on Tuesday, with the spread between the US ten-year note and the US two-year note reversing throughout the session. Very early this morning, I see US ten-year paper paying around 2.81%, which the two-year paper is currently giving up. At this time (and this changes minute by minute), the Two Years is reversed from the Three Years and the Five Years, the Seven Years is reversed from the Ten Years, and the Two/Ten is a toss at any time.

The 7yr/30yr spread is just +16bps, which is terrible because the 3m/10yr yield spread (the largest of all) has narrowed significantly since mid -June to settle this morning at just 95 basis points. Take a look at this spread in action over the past two weeks or so…

Chutes and ladders, oh boy. Remember that the San Francisco Fed has cited the three-month/ten-year gap as the most accurate predictor of economic contraction available to them. On that note, recession fears have also caused a lot of strange activity in the stock markets. May factory orders surprised higher on Tuesday. That did nothing to ease those jitters. The Atlanta Fed does not revise its GDPNow model (currently at -2.1% q/t SAAR) until this Thursday when the BEA puts the June trade balance on the tape, then again Friday for data from the BLS Jobs Day.

Stocks opened deep in the hole on Tuesday morning, with the S&P 500 and Nasdaq Composite down around 2% early on. S&P’s 11 sector-selected SPDR ETFs were shaded deep in the red early on. Then the flow of capital shifted. The S&P 500 would recover throughout the day, closing (+0.16%) at the top of its daily range for a second consecutive session after three successive red candles… 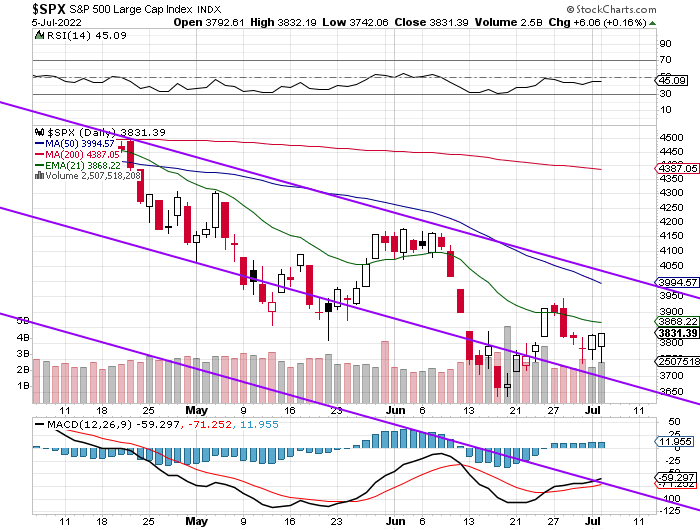 As for the Nasdaq Composite, the rose race has been a bit more aggressive, as has investor demand for tech stocks. The composite closed 1.75% higher for the session, retracing the 11,000 level and bumping into resistance at its 21-day EMA… 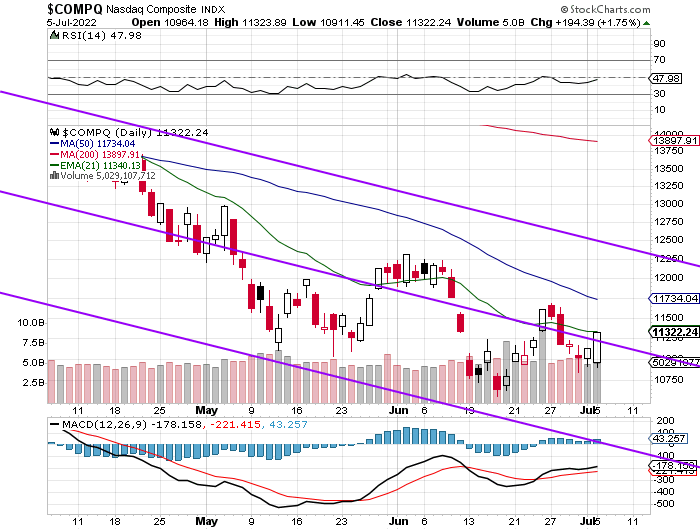 Reason for optimism? Hard to say. While green (or in this case, white) candles are always better than a sharp stick in the eye, we’ve seen too many bear market rallies throughout this (and past) downturn(s) to really count on a lot until it’s done. Clearly, as hopes of the US and global economies avoiding recession have faded, the energy (XLE) and materials (XLB) sectors have fallen out of favor. Over the past 30 days, the (XLE) ETF has lost 21.26%, while the (XLB) has lost 15.62%.

It has become equally clear that tech stock investors do (we already knew) prefer lower interest rate environments. On Tuesday, the Communication Services sector (XLC) rose 2.32%, while the Technology SPDR ETF (XLK) jumped 1.26%. The main industrial indexes within these sectors were indeed quite hot. The Dow Jones US Internet Index climbed 4.57%, led by DoorDash (DASH), Snap (SNAP) and Pinterest (PINS). These three rose by 10.23%, 9.19% and 8.12% respectively.

There was enough love to spread. The Dow Jones US Software Index gained 2%. The leaders there were MongoDB (MDB), up 13.17%, Coinbase Global (COIN), up 12.99%, and Unity Software (U), up 12.76%. Even semiconductors, which have come under increased pressure lately, have managed to recover. The Philadelphia Semiconductor Index gained 0.78% for the session. The large cap leaders were Wolfspeed (WOLF), Micron (MU) and Nvidia (NVDA). These stocks rose slightly (compared to the rest of the technology) by 7.2%, 5.7% and 3%, respectively. Yes, I see Qorvo (QRVO) up 4.1% on Tuesday, and I think at that price QRVO is indeed a large cap, but as you know QRVO fluctuates at a market cap of around 10 billions of dollars. It’s hard to call it a large cap or a mid cap and be right a few hours later.

Trader Heads Up, Part One 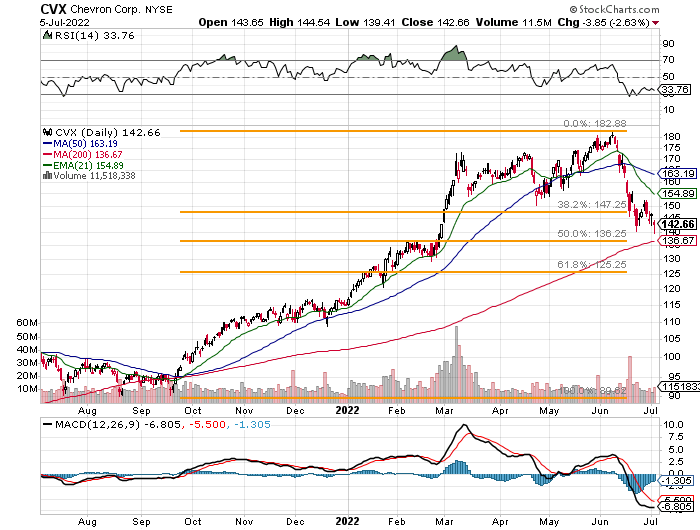 The 200-day SMA looms large for CVX because this spot is not just where a default would lead to reduced institutional exposure as risk managers tap portfolio managers on the shoulder, but also sits very close to a 50% retracement of the action from September to early June. This space is a big problem for CVX, and for the XLE ETF itself… 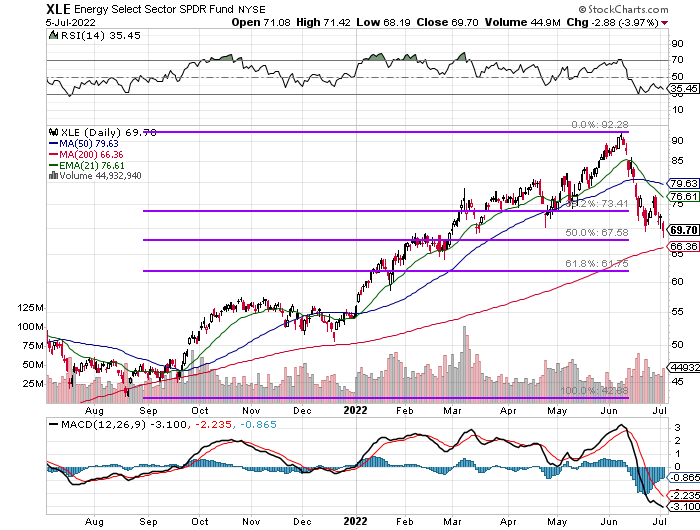 What gives here? First, industrialists tend to do poorly in recessionary environments, and defense contractors are industrialists indeed. Second, these names are indeed industrialists heavily dependent on public spending, and there is speculation that fiscal budgets could be refocused elsewhere despite the danger that this poses at a time like this. Third, as we know, a number of foreign governments, mostly allies of the United States, are looking to these companies to help build their defense capabilities against Russian aggression.

The problem there, besides the fact that the recession outside the United States is expected to be much worse than the one inside, is the fact that many NATO allies use the euro and the he euro is weakening quite rapidly against the US dollar to the point of approaching parity. This ultimately makes potential purchases made in euros by foreign governments less valuable to these companies, or if these transactions are made in US dollars, unit sales will likely have to be reduced.

And now? If one is heavily exposed to these names, as I have been, as I still am to a slightly lesser degree, one needs to think about the right size of that exposure until there are more certainty. These names have protected us from the sell-off in the market this year. I’m not sure aerospace and defense can carry this load much further unless there’s a reversal in currency valuations and unless defense is prioritized like I think it should being. Stay tuned.

Counter… Falling commodity prices are a harbinger of recession.

Indicate… Economists currently see the strength of the labor market as a key support that will prevent the US economy from entering a recession.

Counter… Economists also see the recession as the catalyst that will burst the labor market bubble.

Indicate… Federal Reserve officials have signaled that the risk of not fighting inflation is greater than the risk of slowing the economy due to the need to fight inflation.

Counter… Traders now expect a dovish turn from the Fed in response to collapsing economic growth.

Chicago-traded futures markets are currently forecasting a 75 basis point rate hike on July 27 and a 50 basis point hike on September 21. (Jackson Hole’s annual clambake occurs in August.) Then these futures markets see increases of 25 basis points in November and December, taking the fed funds rate to 3.25% to 3.5%.

The Charge of the Light Brigade

Cannon to their right,

Cannon to their left,

Cannon in front of them

Assaulted with gunshots and shells,

Boldly they rode and well,

In the jaws of death,

In the mouth of hell

The Fed (all Eastern times)

(XLE and NVDA are interests in Member Club Action Alerts PLUS. Want to be alerted before AAP buys or sells these stocks? Learn more now.)

Receive an email alert each time I write an article for Real Money. Click “+Follow” next to my signature for this article.